“That’s one small step for a man, one giant leap for mankind.”
Neil Armstrong

Over the coming months, Active for Animals will add ideas to the One Small Step project page. These will be activities to help you take your first step in to conservation activities.

The use of snake skins for the commercial production of leather only started in the mid-1920s, but by 1990 a regional review of supply-side countries in Asia found that python populations in several countries had already declined. The 1990 report discussed that collecting pythons for the skin trade had adversely affected populations and also found evidence that the true value of skins was ‘substantially under-declared’. Step forward 30 years and sadly all the same problems remain, even though report after report has reaffirmed the conclusions of the 1990 research.

Research published in 2020 found that between 2003 and 2013, luxury fashion brands had thousands of exotic leather goods seized by U.S. law enforcement, nearly 70% of which were exotic leather products. Reptiles accounted for 84 percent of all items, many of which were belts, watch bands, wallets, shoes, and purses. According to the official seizure records Ralph Lauren accounted for 29% of the seized items, Gucci 16%, Michael Kors 10%, Jil Sander 6% and Coach 5%. Gucci had the highest number of individual seizure incidents followed by Yves Saint Laurent; other designers who has product seized included Diane von Furstenberg, Chanel, and Versace.

This research has been hard to do in more recent years because the U.S. Fish and Wildlife Service after freely releasing this data for decades stopped doing so in 2014. As a result, the Center for Biological Diversity, with support from Harvard Law School’s Animal Law & Policy Clinic, is suing the U.S. Fish and Wildlife Service for failing to release data on the wildlife traded across U.S. borders. The United States is a major importer of wildlife, bringing in an estimated 225 million live animals and 883 million dead specimens annually for the pet trade, décor, fashion, food, research and trophy hunting more. 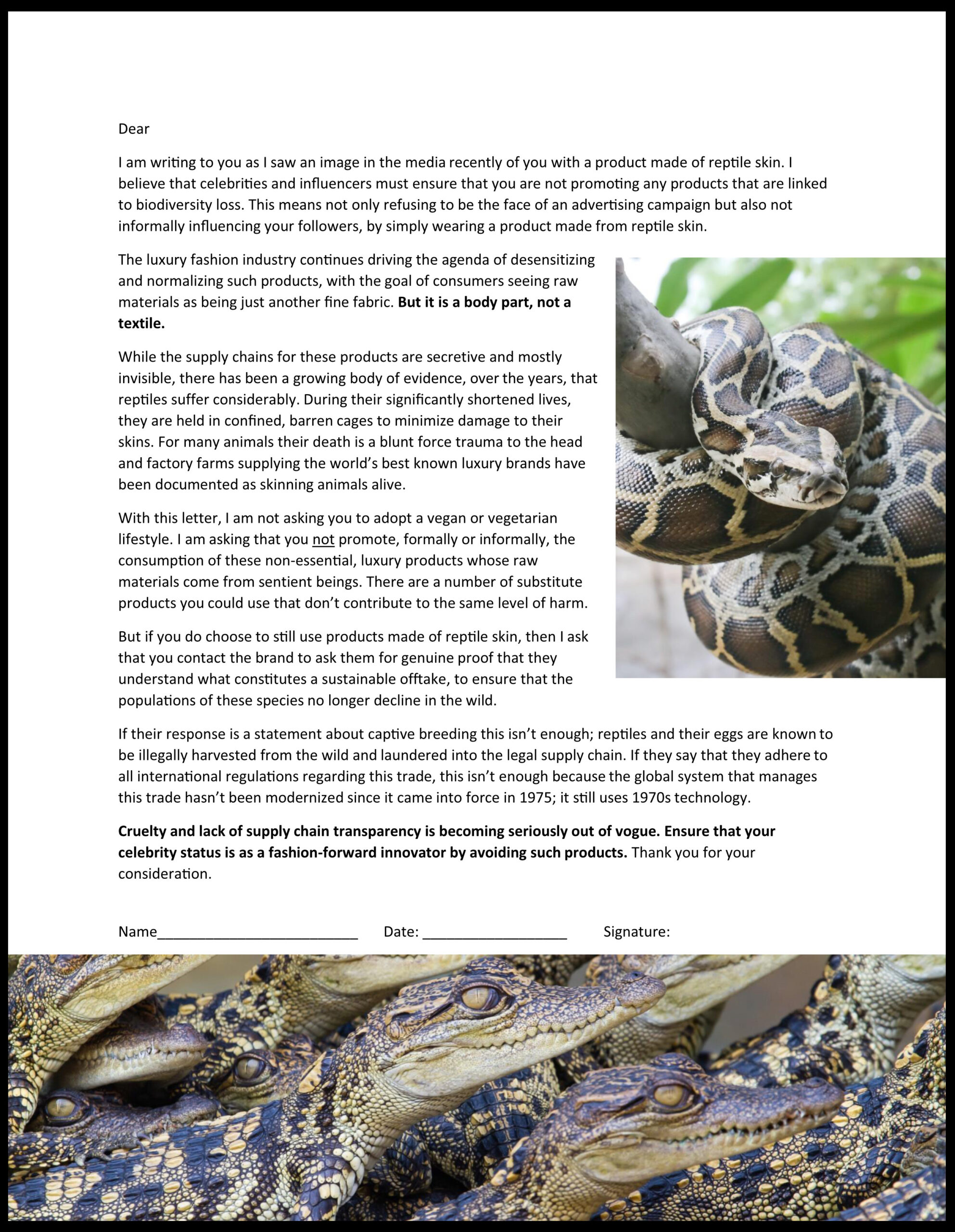 If there is one species that shows that the regulation of the legal trade doesn’t work in its current form it’s the Siamese Crocodile. These crocodiles were once widespread throughout much of mainland Southeast Asia. From the 1950s commercial hunting for skins and then the collection of animals to stock crocodile farms, again to supply the international skin trade, means the species has disappeared from 99% of its former range. CITES was set up to protect the likes of the Siamese Crocodile, which has been listed on CITES Appendix I since the convention came into force in 1975. In 1992 the IUCN declared the Siamese Crocodile to be effectively extinct in the wild. It is estimated that there are fewer than 1,000 adult individuals surviving in the wild across its historic range, making the Siamese Crocodile one of the world’s rarest reptiles.

In 2021, conservationist were excited when eight Siamese crocodile hatchlings were photographed in the wild in Cambodia. The good news story echoed around the world. What the media, regulator (and the luxury leather industry) are NOT talking about is that the massive trade in captive bred Siamese crocodiles has continued unabated for 50 years. In the years 2010-2019, 1,430,000 were exported from Thailand alone, a country where it is estimated that there are only 200 Siamese crocodiles alive in the wild. A 2013 submission to CITES CoP by Thailand highlights that there are 836 crocodile farms registered with the management authority of Thailand. Among them there are 23 farms registered as a captive breeding operation that breed Appendix I species in captivity for commercial purposes; it doesn’t mention conservation. Viet Nam is the next biggest exporter with 576,269 and then Cambodia 177,899; for comparison, fewer than 250 mature individuals are thought to be living in the wild in Cambodia. This is a very clear example of how the legal trade has not helped to save these species in the wild.

Get Active for Animals by becoming a Reptile Ambassador. If you see an influencer wearing reptile skin, send them the letter and let them know it’s time this trade was either cleaned up or stopped. 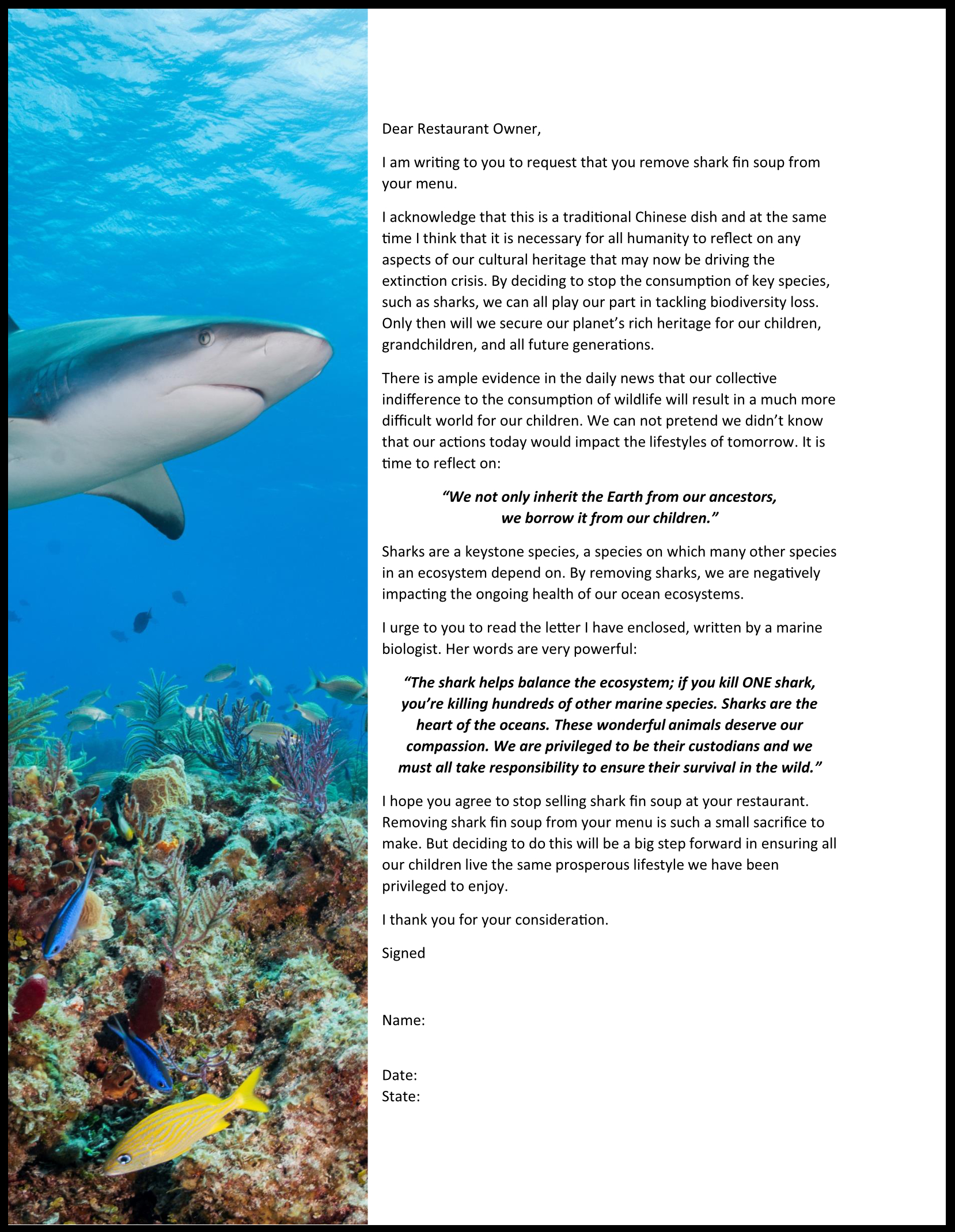 Inspired by a compelling letter from a marine biologist to the Chinese restaurant community, Active for Animals created a letter for supporters to download. The letter could be emailed, posted or dropped into any restaurant with shark fin soup on the menu.

What made this campaign easier to support is the fantastic work by the Animal Welfare Institute to compile a directory of restaurants currently offering shark fin in the United States. Simply click on the map below and search for restaurants selling shark fin in your state. 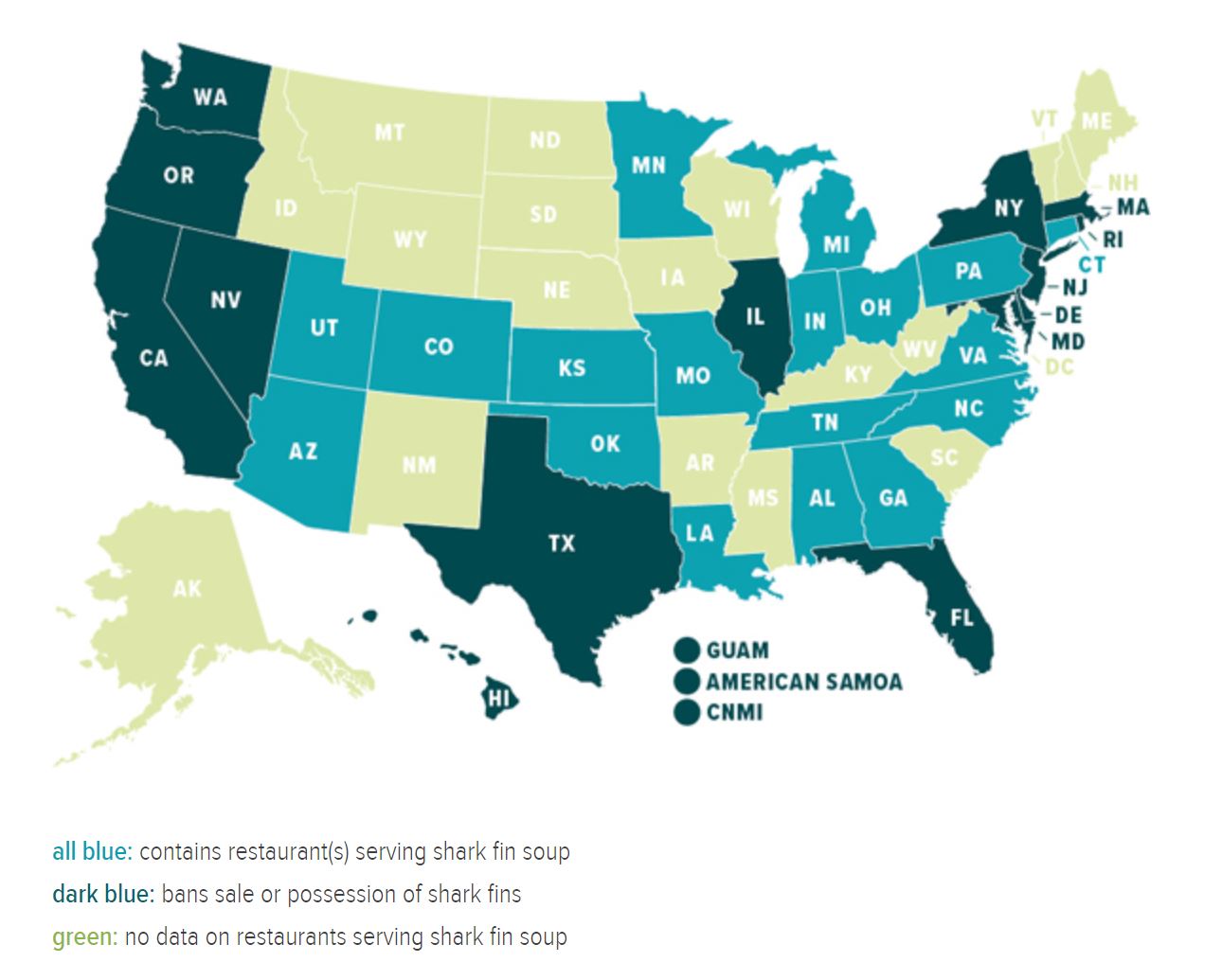 Expanding on Active for Animals’ ‘Rhino Ambassador’ campaign, we have created a way for our supporters to take one small step to help tigers and all exotic animals that can be privately owned in the USA.

Undoubtedly, the Tiger King documentary has made more Americans aware of our country’s lax regulations and ownership laws when it comes to exotic animals.

It is estimated more tigers live in captivity in the USA alone than the 4 thousand tigers left in the wild. The key word is estimated, because trade and ownership of exotic animals, including tigers, is opaque.

Which is why Active for Animals has created a letter for our supporters to send to their State Governor, requesting the laws and regulations about owning exotic animals, for commercial purposes or personal pets, be strengthened.

This will be an ongoing campaign for Active for Animals, as our research has shown that too few people are aware of the scale of exotic animal ownership in the USA.

By tackling lax ownership laws in the USA we not only ensure that we are not contributing to biodiversity loss, we can also ensure exotic pets don’t become invasive species damaging our country’s unique and precious ecosystems. Exotic pet that escape or are released into the wild because the owner isn’t interested in them any more are causing problems for fragile ecosystems. 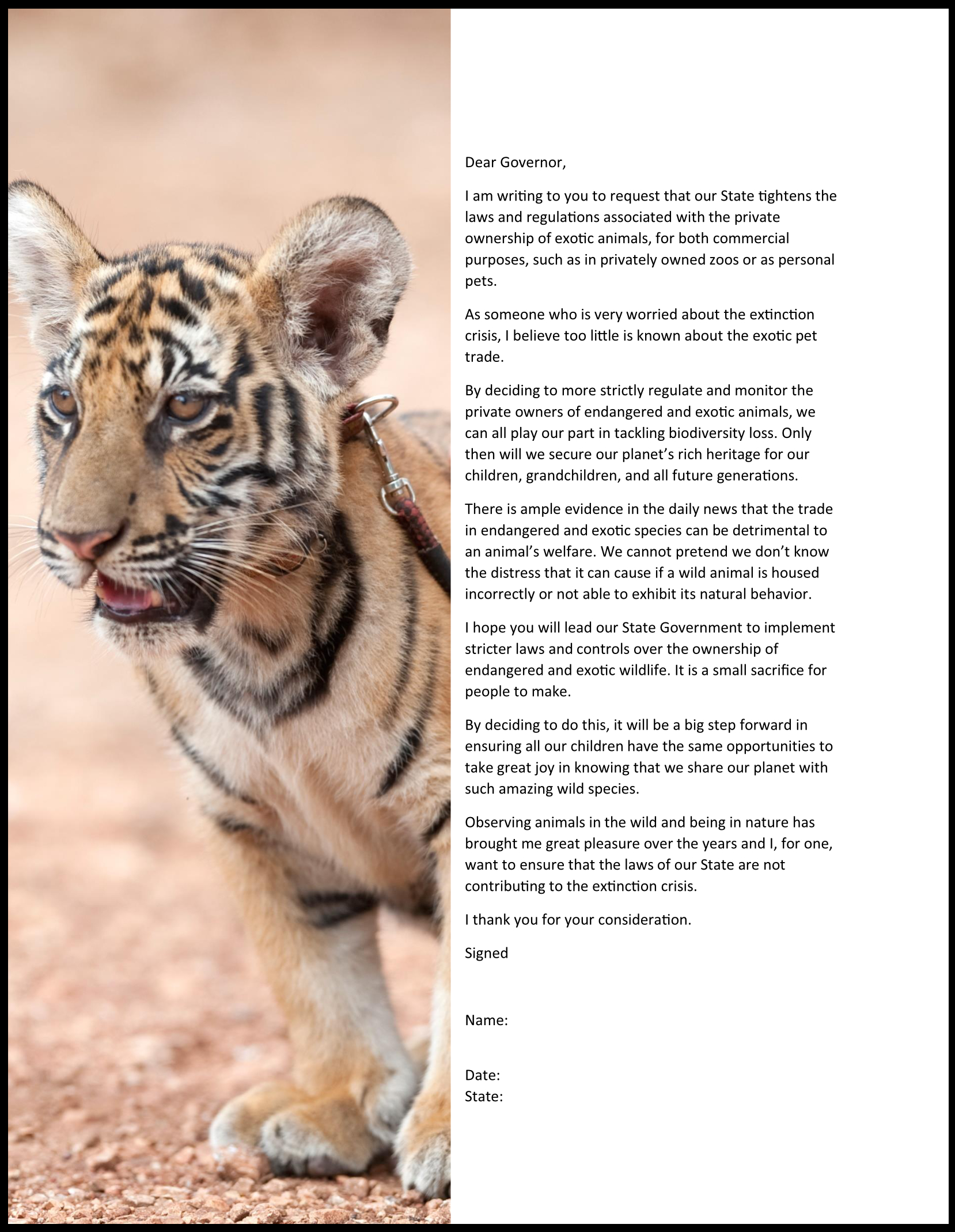 As you may know, the demand for rhino horn in Vietnam is high and this desire in Vietnam is driving rhino poaching. Wherever you are in the world, you can become a Rhino Ambassador and one of the easiest and most effective ways of showing your support for rhinos is to send a letter to your local Vietnamese Embassy asking for their help to close down the trade.

To help Active for Animals has done two things. The first is to provide you a link to the contact details of all the Vietnamese Embassies Worldwide. The list provides the address and phone information. We recommend that you don’t sent an email, as they can be more easily ignored. To stand out, the best thing to do is to send a letter by post. But if you don’t want to send your letter by post, then send an email.

The second thing we have done is create three sample letters that you can use, if you are not sure what to write. 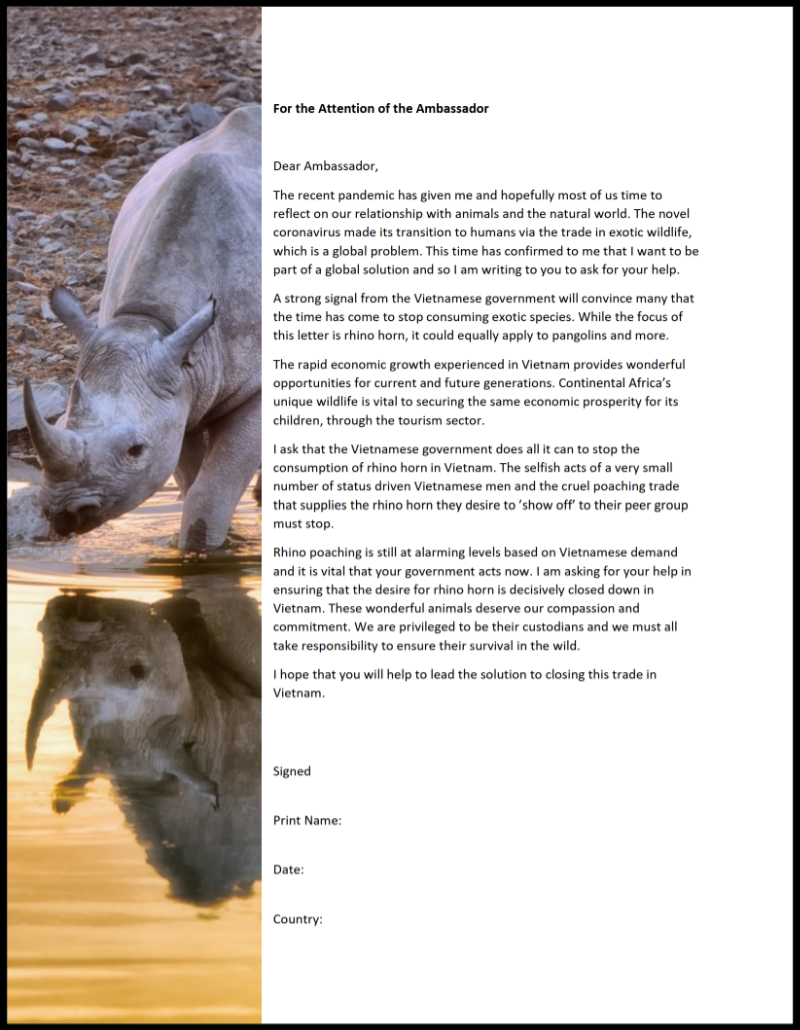 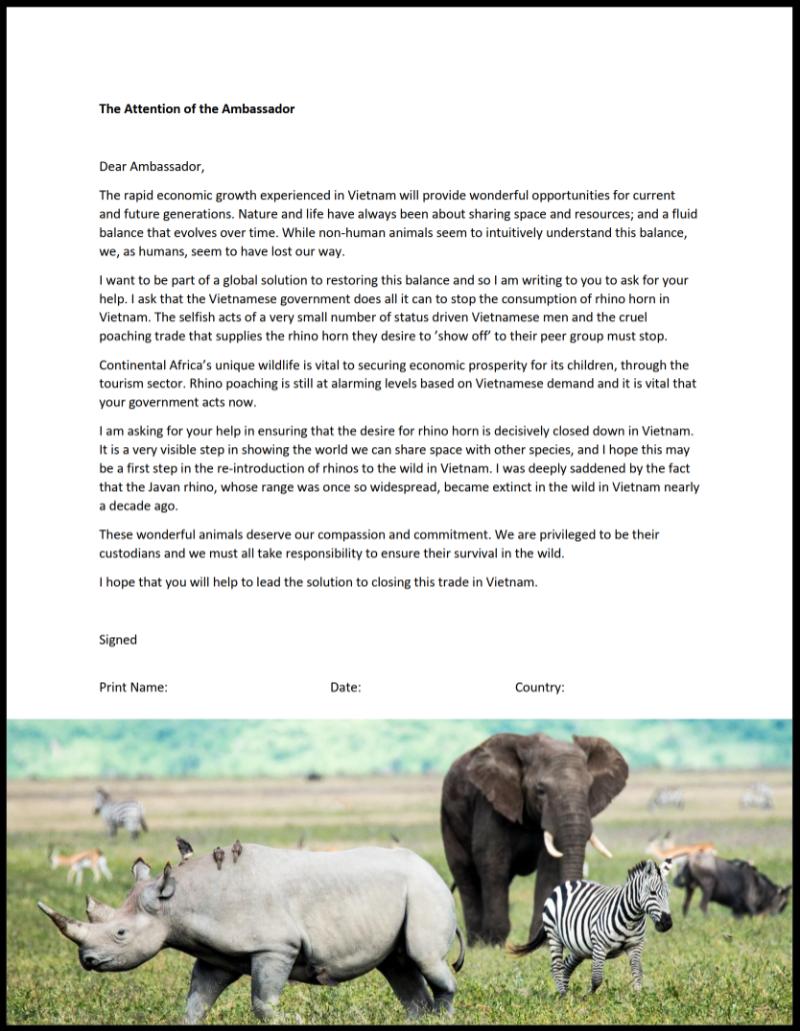 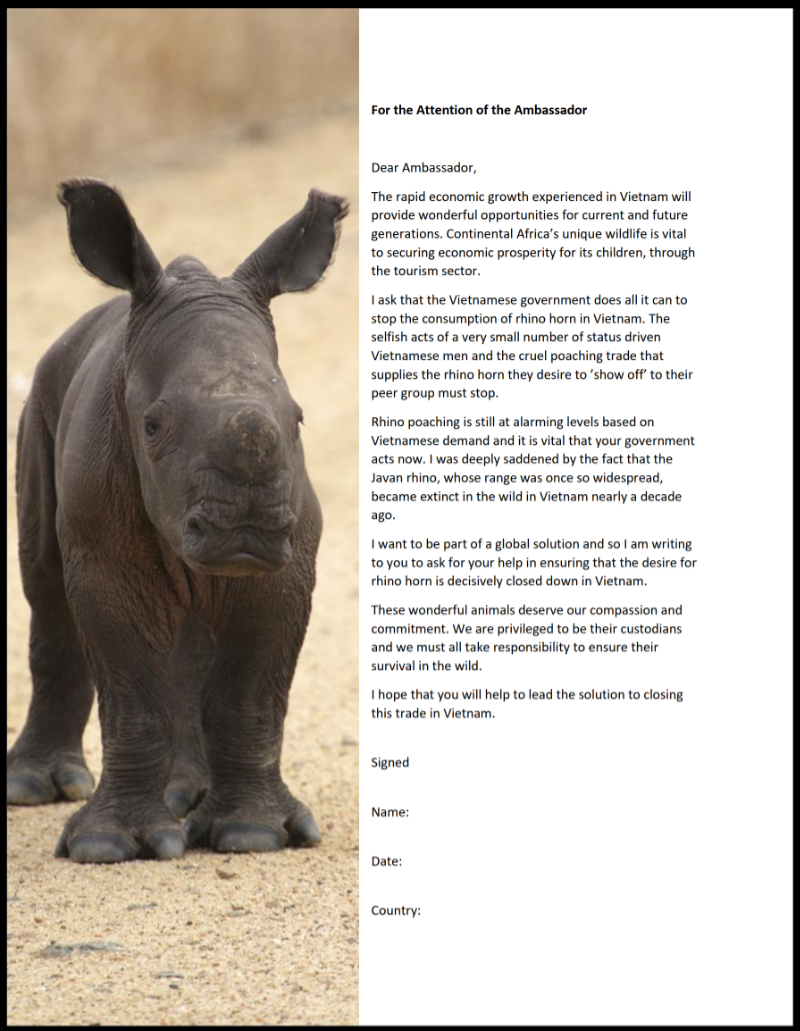 Don’t worry about only using the term “Dear Ambassador” in your letter, often Embassy websites aren’t updated and the Ambassador has changed; we recommend this universal salutation.

Join forces with your family and friends, or maybe you could get your class or school to also send letters.